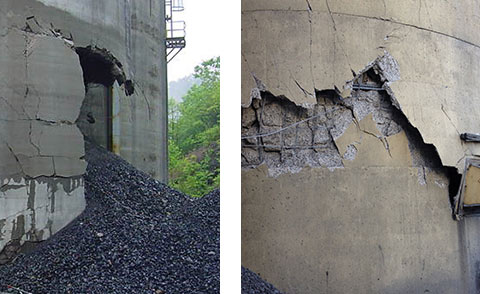 In many bulk storage ash silos the cone hopper is often chosen for material flow-ability purposes. Despite the fact that structural failures attributed to suspended steel cones supported directly on the silo walls have been documented for decades, specifiers seeking lower costs continue to use suspended cone design as a cost reduction tool.

As early as 1992, a majority of engineers serving on the Silo Design Committee of the American Concrete Institute (ACI 313) concluded that lower cost suspended steel cone designs were not worth the risk based on known failures.

The hopper support mechanism, must be an independent ring girder or a stiffened section of the silo wall. It must also be designed to carry the entire weight of the silo contents in the case of these structures. If the proposed design includes silo wall anchorage, with an integral ring girder, the design and construction of the section are very demanding. The section of wall at the hopper attachment must be designed to accommodate ring compression, vertical bending and vertical shear strength required to support the hopper forces and tension anchorage for the hopper. The result is a very heavily reinforced section of silo wall. The placement of the reinforcing steel and anchorage in a small height of silo wall is challenging. It is especially challenging if the silo wall will be built using slip-form techniques. The contractor must install a large amount of reinforcing steel and hopper anchorage steel in a small area of silo wall within a short amount of time. 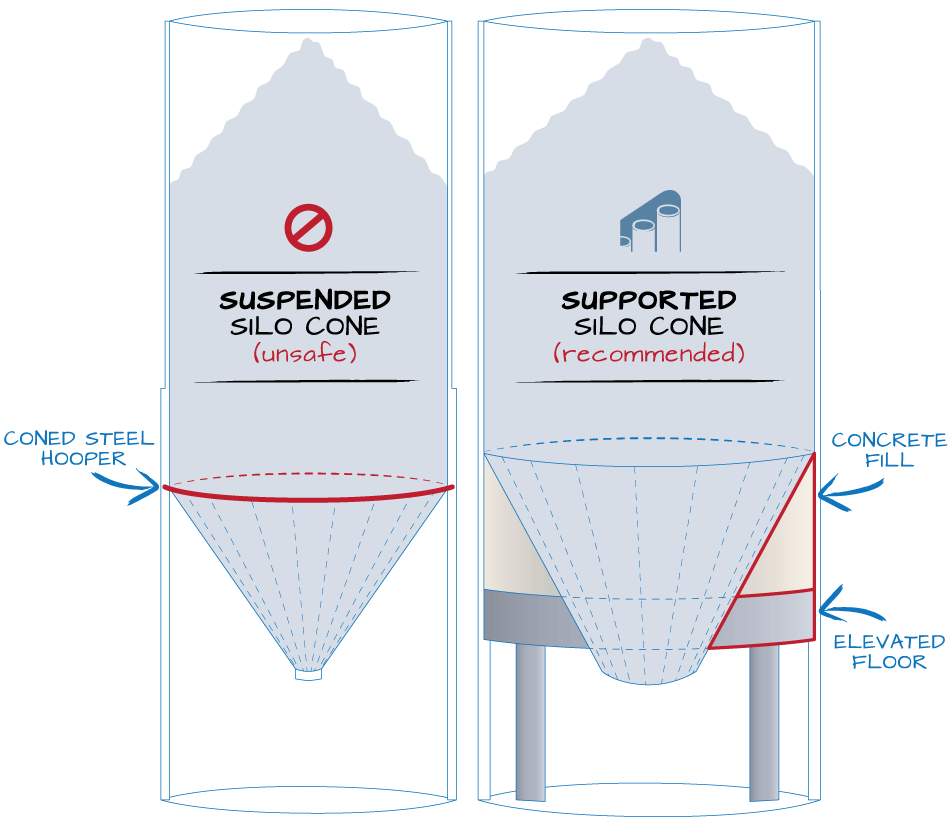 Rather than using a suspended cone hopper, our design supports the hopper from below, utilizing a thick reinforced concrete slab. The slab is supported by a ledge in the silo wall. A small portion of the steel hopper cone extends below the concrete slab. Above the concrete floor, the sloped conical hopper will be formed using thin steel plate backed by concrete fill. The steel hopper plate is merely a wear liner, not a structural element. The hopper plate welding consists of small fillet and groove welds. The welds serve only to anchor the plates in place during construction, and are not structural welds.

Supporting the hopper from below using the thick concrete bin floor offers several advantages to the owner.